They’re helpful, efficient, ready with a smile, and devoted to serving patrons. We’re blessed with awesome volunteers–and lucky to share their goodness (and stories) with you in an ongoing series. Go here if you missed Debbie, Chris, Linda, Karen, Johnny, or Ricki.

Between her volunteer work with the library and with the Friends of the library, Shirley wears many hats–and has a lot of fans. She also has the gift of gab. Want to know how she got it? Find out below as she shares her sweet ‘Cinderella’ story and tells us what an ‘Inverted Jenny’ is (hint: not a yoga pose).

What do you do as a volunteer? 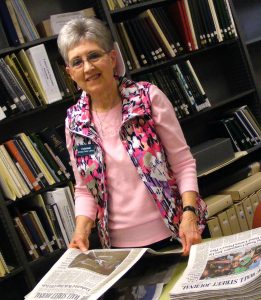 I work at the desk checking materials in and out and helping patrons with whatever they need. I also archive the newspapers every week, and I shelve materials or do whatever else is needed. I like to keep busy, so I can always find something to do, whether it’s helping a staff member with a project or just straightening up.

What inspired you to volunteer with us?
I joined the Friends in 2011 because my husband had passed away the previous year and I needed something to fill my time. This seemed like the perfect fit. I’ve been in love with books since I was old enough to read. Gradually, I took on some responsibility by helping with the annual book sale, the Friends’ big fundraiser for the year. Now I also cashier the book sale and make the deposits for the treasurer as funds come in from our annual renewal letter. After some time, I decided to learn and get trained to work the check-out desk. It’s something that I truly enjoy–meeting people and helping them find books, get a library card, or whatever else they need.

Have libraries played any special role in your life?
As a child, I went to the library frequently, so the library has been very important. I took Library Science for my English course when I was a senior in high school, and also worked in the school library.

I also have a sister who lives in Iowa and works in a library, so when we get on the phone, we can spend three or four hours talking about library stuff!

Tell us a little bit about your background.
I was born in Kansas and moved here when I married the first time. My husband was in the military and stationed near my hometown, but was from this area.

I worked at Hess’s for two and a half years during that time, in 1965-1967. I worked in maternity, gloves and scarves, blouses and sweaters, and cosmetics, representing the John Robert Powers line. 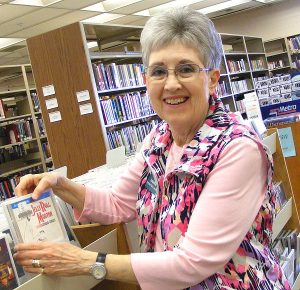 After my first marriage ended, I had no intention of marrying again. I worked as a hostess/waitress at two restaurants over five years, including one in the professional buildings across from the hospital (LVHN Cedar Crest). A gentleman who had his business in the offices above the restaurant came in for lunch often, and while he said later on that it was love at first sight for him, I was oblivious and not looking! He came in every day, though, so we got to know each other gradually, and after about a year, we started seeing each other and eventually got married.

My husband was a philatelist (postage stamp dealer) and had built up a successful business, which was strictly mail-order. We had customers all over the world and several employees. We went to trade shows and also bought from collectors in order to get items for resale. It involved a lot of travel around the country. I met a lot of amazing and interesting people. My job when we went to a collector’s home was to spend time talking with them so my husband could evaluate the collection more quickly. Otherwise, depending on the size of the collection, we could be there for days. That’s how I was able to learn the gift of gab–which is great for working at the front desk in the library!

We were able to spend 27 wonderful years together before he passed away in 2010. It was a real Cinderella story. It was a second marriage for both of us, and having had first marriages that didn’t work out, we cherished each other that much more.

I have two step-daughters, six grandchildren and six great-grandchildren, with another one on the way. I enjoy spending time with them whenever possible.

What was the most rare stamp you and your husband came across? 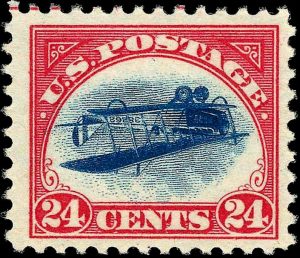 It was an ‘Inverted Jenny’ 24-cent stamp. There are only 100 of them in the world, so they’re quite rare, and we were able to purchase one here in the area, which we later resold. That was exciting.

[Note: According to this fascinating story in Smithsonian Magazine, the ‘Inverted Jenny’ features a Curtiss JN-4, or “Jenny” and celebrated the launch of the U.S. airmail service in 1918. Due to a printing error, the plane appeared upside down, and although the mistake was caught quickly, it was not before 100 of the stamps were released into the public and purchased by William T. Robey for $24, who later sold them for $15,000. In recent years, a single Inverted Jenny sold at auction for more than $500,000, and a block of four sold at auction in 2005 for nearly $3 million.]

What are your hobbies or interests?

Volunteering at the library and helping the Friends are really my main ‘hobbies’ these days. In fact, I’ve just been asked to serve on the library’s long-range planning committee due to a current member moving out of the area, so that’s something new I’ll be doing. 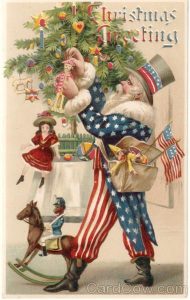 Aside from that, my husband and I collected antique postcards for about 15 years. We both had large collections and I’m in the process of selling them now. He had all four ‘hold to light’ Uncle Sam Santa antique postcards, which is quite rare.

I’m also secretary for my church council, spend time with family and friends, and of course, I love to read!

Do you have a favorite author or authors?
Karen White, John Grisham, and Nora Roberts.

Lightning round! Favorite TV show or movie:
The Sound of Music.

Last book you read:
Wine and Punishment by Sarah Fox.

Any parting thoughts?
I love volunteering at the library, love our librarians and everyone who works or volunteers here!

_______
Do you have a special interest or talent that you’d like to share with others? Would you like to lend your energy to the library in other ways? Stop in and ask for a Volunteer Interest form at the desk!

[Disclaimer: the views, information or opinions expressed in ‘Meet Our Volunteers’ interviews are solely those of the volunteers and do not necessarily represent those of the library or its employees.]