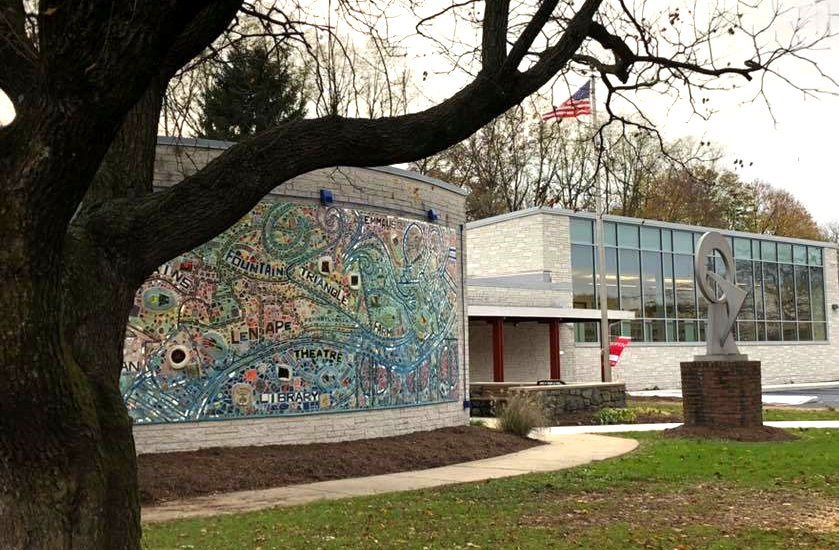 Welcome to the Emmaus Public Library (EPL). EPL serves as the home library for residents of Emmaus Borough, Macungie Borough, and Upper Milford Township. It is one of 12 libraries that form the Lehigh Carbon Library Cooperative (LCLC) and adopted a common card in January 2019. EPL also serves patrons from participating AccessPA libraries with a reciprocal agreement.

The library’s board of trustees is made up of volunteers who represent the three communities it serves. Board meetings are open to the public and are held monthly on Tuesdays at noon (check the calendar for specific dates).

A LIBRARY IS BORN 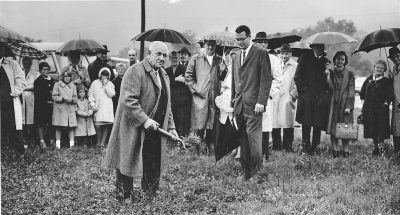 The Emmaus Public Library had its beginnings in the 1930s, when the officers and members of the Emmaus High School Alumni Association recognized the need for a public library facility. In 1938, John D. Weaver donated a building on Main Street in downtown Emmaus for that purpose. Since it had to be refurbished for library use, it was not ready until June 1944 and another building was rented to house the library during the renovation. A library board was appointed in 1939, and Dr. Gerald S. Backenstoe became the first president. The new library proved a big success in the little borough — by 1949, book circulation had increased to an average of 1,900 per month. 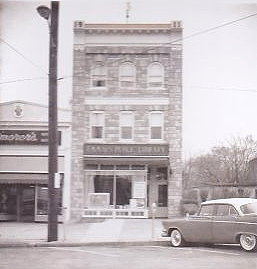 By the mid-1960s, the book collection numbered about 8,000 volumes. Space in the once roomy Main Street building was no longer adequate. The borough population had more than doubled since the library had become a reality. After many citizens devoted countless hours of time and effort to plan for the future of the library, a new program was put into effect. The result was an ordinance that called for the establishment of a borough library conforming to the Pennsylvania State Library Code. 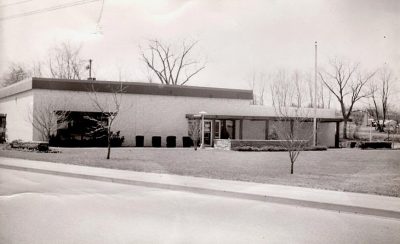 In April 1965, federal funds became available, resulting in the construction of a new library facility at Main and Ridge Streets, a site formerly used for ice skating in the winter and pick-up ball games in the summer. The dedication of the “new” Emmaus Public Library took place on June 3, 1966, and Sheila Hess was chosen as the head librarian.

In 1967, Upper Milford Township was the first municipality to seek a contractual agreement with Emmaus for library services for its residents. Lower Macungie was next (1967), followed by Macungie (1969) and Alburtis (1971). The library continued to grow by leaps and bounds, acquiring more books and other materials as the membership continued to increase.

ROOM TO READ
By 1979, the library shelves were bulging with 48,000 volumes — 13,000 over capacity. Once again, a committee composed of local volunteer citizens was formed to study the space problem. A fund drive to raise money for the recommended addition to the building began in the 1980s and continues to this day as the EPL Annual Fund Drive. Through the generosity of many individuals, service organizations, companies, businesses, and others, construction was completed, and the dedication of the much-needed addition was held on September 26, 1982. 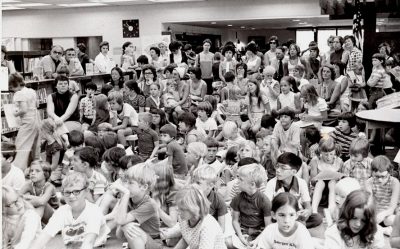 In 1984, the library board approved the establishment of the Endowment Fund to create a permanent financial resource to keep the library a vital part of the community. In 1998, a new Friends of the Emmaus Public Library group was established. The goal of the Friends group is to support the Emmaus Public Library through fundraising and specific social and educational events to help defray costs not covered through other funding means.

In the early 1990s, a wing dedicated to Margaret Knoll Gardner was funded by a private donor. This wing is used for meetings and programs conducted by the library and other organizations. In 1993, volunteer citizens conducted a computer fundraising campaign to equip the library for the burgeoning technological age. The campaign was a great success; in August of 1994, the library began to use computers for book circulation. A short time later, the library catalog was computerized as well.

In 2001, Lower Macungie Township (LMT) established its own library and, because of its location, Alburtis came under umbrella of the LMT library. This greatly reduced the number of “home” patrons registered at EPL — a main factor in calculating state aid each year. As a result, EPL lost a portion of its income from state aid and reduced expenses by closing on Fridays.

JOINING FORCES
A group of library directors and staff members began meeting in 2014 to discuss the potential of a library “system” that would link the items and patrons of neighboring libraries in Lehigh and Carbon counties. The result was an agreement by 12 libraries to create the Lehigh Carbon Library Cooperative (LCLC). The goal of the LCLC libraries was to share their holdings — items in the collections at each library — with every patron who met the residency requirements of a participating library. 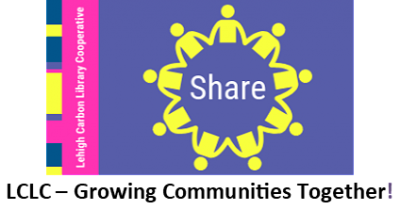 In 2017, a schedule was set for each of the member libraries to migrate to SPARK — a new and more cost-effective circulation system — by October 2018. Under the guidance of Services Manager Angie Devers, Emmaus migrated more than 13,000 patron accounts and nearly 90,000 items in June 2018 while in the midst of construction of the new Children’s Wing (see below).

Once all LCLC libraries were live on SPARK, resource-sharing rules were finalized. LCLC libraries began issuing the new ‘SHARE’ common cards in January 2019, and resource sharing — allowing patrons to borrow and return most items at any participating library — in February 2019. As of June 2019, LCLC patrons have access to more than 700,000 items, and most can be picked up from a preferred library in less than three days, sometimes as quickly as two hours.

SPREADING OUR WINGS
November 8, 2018, marked a momentous occasion — the ribbon cutting ceremony for the long-awaited Children’s Wing expansion. It was the culmination of a long journey.

The process for funding and designing a space custom built for our youngest readers began in the early 2000s under the guidance of Library Director Frances Larash and Children’s Librarian Martha Vines, with help from the Library Board and community members. The dream for a seamless new wing to house the growing children and young adult collections — as well as space for events and programming — began taking shape after an initial land survey and design in 2006. Planning and fundraising efforts were stalled, however, by the economic crisis of 2008 and the 100-year floodplain shown on area maps from FEMA, requiring a new, elevated design. 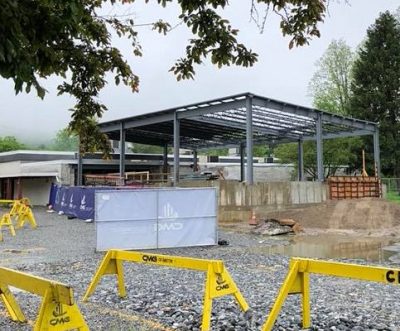 In 2013, new consultants and a reinvigorated economy helped jump start the “new” planned expansion — this time featuring a  floor plan elevated 18 inches above the floodplain to meet the new requirements.

Over the winter of 2017-2018, primary construction bids were placed and awarded totaling $1.18 million, with additional project contingencies and interior furnishings pushing the total budget to just over $1.36 million. Financing such a large project after so many years of dormancy was a tall task. EPL and the Borough of Emmaus worked together to win a $500,000 Keystone Grant. In addition, donations from local businesses, patrons, community organizations, and the Friends of the Emmaus Public Library covered most costs.

One of the most talked about components of construction is the Cordova stone used on the exterior facade. In order to match the building as it was constructed in the 1960s, masons hand cut new stone on site to match the original proportions, producing an addition that looks like it was always there. 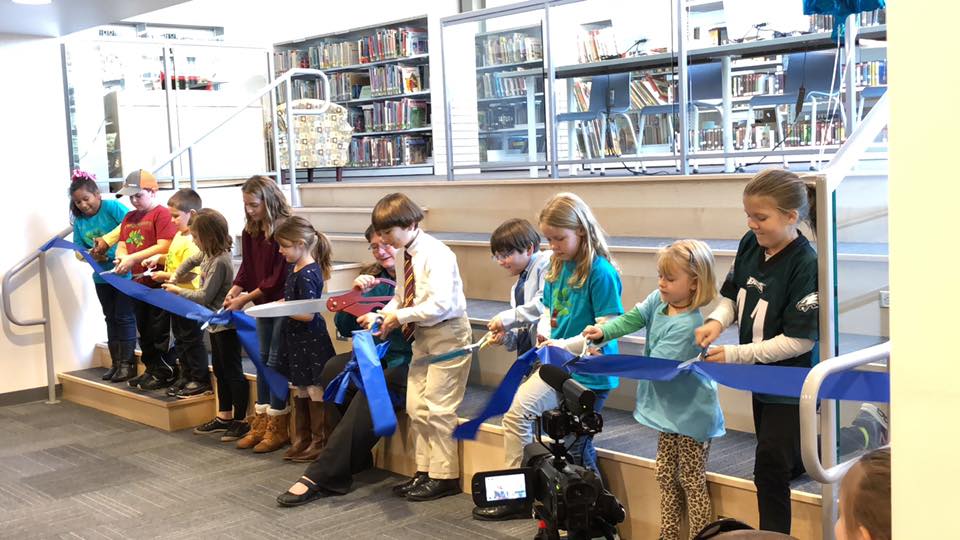 LEADERS THROUGH THE YEARS
Dr. Gerald S. Backenstoe laid the groundwork for leadership in the Emmaus Public Library, including Sheila Hess, who served as head librarian from 1966 to 1967. She was succeeded by Elaine Timbers as head librarian, who served until her retirement in 1987. 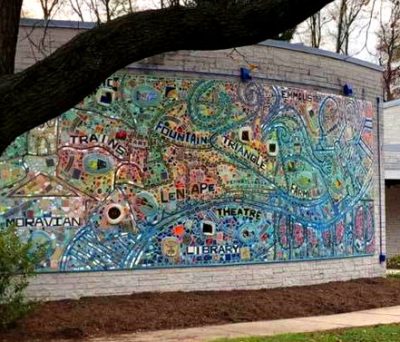 In 2015, a colorful mosaic depicting the local area was unveiled on the rotunda wall outside the Margaret Knoll Gardner room — a collaboration between the East Penn School District, the Emmaus Arts Commission, and Philadelphia artist Isaiah Zagar.

Frances Larash served from 1987 until she retired as library director in the spring of 2014. During her tenure, she launched a capital campaign to increase the library’s square footage with a much needed Children’s Wing expansion project (see above) and worked to put technology into the library, including internet access and a computerized circulation system.

After serving as a board member in 2009, then elected to board president in 2011, Krista Pegnetter served as library director from September 2014 to October 2016. During that time, she led the process of finalizing the grants, donations and other funding needed to make the children’s wing a reality and laid the ground work for a new library cooperative within Lehigh and Carbon counties.

Amy Resh served as library director from January 2017 to September 2018 and oversaw the groundbreaking of the new wing as well as migration to a new circulation system, SPARK.

Maryellen Kanarr, formerly adult services librarian at EPL, was promoted to library director in September 2018. In her first months at her new role, she hosted the ribbon-cutting for the new children’s wing and supervised the introduction of a common card and resource sharing with the launch of the Lehigh Carbon Library Cooperative in January 2019.

In April 2019, the library achieved gold-star status in the PA Forward Star Program, sponsored by the Pennsylvania Library Association. PA Forward acknowledges libraries for the work they do to help residents improve their overall quality of life by integrating five key literacies into their events and programs: Basic Literacy, Information Literacy, Civic and Social Literacy, Health Literacy, and Financial Literacy.

With a growing collection of physical and digital items, more than 300 events a year for patrons of all ages, and a commitment to investing in technology, the library honors its rich history as it focuses on the future and on its mission: To enrich our community and inspire lifelong learning by uniting people, ideas and information.

IT TAKES A VILLAGE (and a lot of volunteers)
The success of the Emmaus Public Library is due in large part to its large force of volunteers. They have been active in all facets of library operation since its humble beginnings. Volunteers are still vibrant today, assisting the professional staff in serving patrons and working behind the scenes. Private citizens, area service clubs, local businesses, large corporations, youth organizations, and many others working together have all contributed to the tremendous growth and success of the Emmaus Public Library.

Some of the above information was excerpted from a booklet (The History of the New Emmaus Public Library) issued by the library in 1991 on the occasion of its 25th anniversary and a post from Board Member Carl Cramer featured in the library’s blog in October 2018.