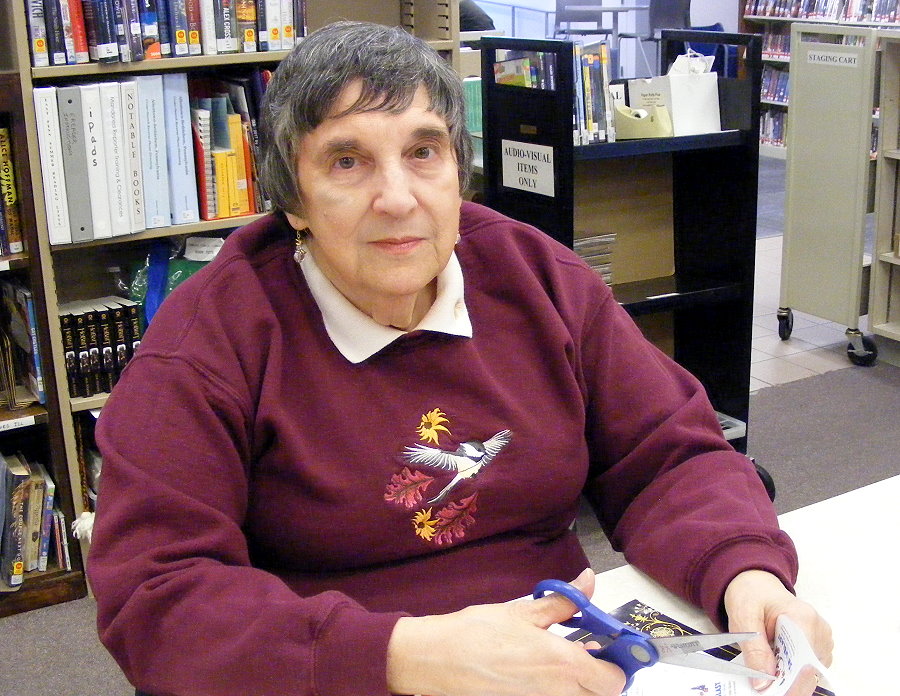 They’re friendly, dependable, and willing to pitch in wherever they’re needed. Lucky for us, they’re also our amazing volunteers. Today, we’re sharing the fourth in a series of profiles shining the spotlight on them. Go here to read about Ricki, Johnny, and Karen.

Linda H (we have two Lindas) has a knack for conversation, has a wicked sense of humor and loves chocolate. She also happens to be our longest-serving volunteer. Can you guess how long she’s been serving the library and its patrons? Ten years, you say? 20? 30? Guess again…

How long have you been volunteering at the library?

What do you do as a volunteer? Have you done different things over your long library career? 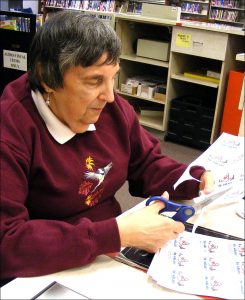 I work behind the desk, which means taking care of whatever patrons need — checking items in and out, collecting fines, updating cards, helping patrons find books, answering questions, answering the phone, etc. I also shelve items in areas that are close to the desk when there are lulls, plus I help Angie (our services manager) and other staff members or volunteers with projects such as folding flyers, or — like today — cutting out graphics that will be turned into buttons for SnowBlast.

Through the years, I’ve helped with lots of projects, including applying security strips to books, moving and shifting books to other areas of the library, and also helped with a type of inventory. On occasion, when there was a “backup” for one reason or another, I would come in and help to shelve books.

What inspired you to volunteer with us? Have libraries played any special role in your life?

My mother and father were avid readers. They believed that reading opened up the whole world to you. If you can read, you can learn about and do just about anything you want.

I had library science (a required class) in Emmaus High School. Josephine Hinkle was the librarian. I walked to school every day with my friend Evangeline. She joined the Library Club, so I did too! ( Evangeline went on to become a librarian and recently retired from a lengthy career in a Maryland library.) 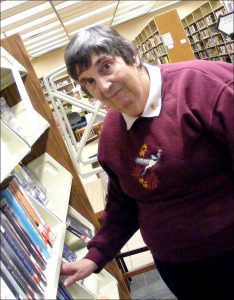 Being a member of the Library Club meant working behind the desk. We learned how to do many things:  checking books in and out, shelving, doing the card catalog, “reading” shelves, doing inventory, etc.  We took care of these things during study halls, or before and after school. (The Club also raised funds and went to New York for a Broadway show each year. I saw The Sound of Music, and Mr. President.)  the building of The Emmaus Public Library was on the ballot in the borough when I was in high school, and members of the Library Club (including me) handed out literature at the polls in support of the building.

Fast forward to 1980. I had been volunteering in the Jefferson School Library — where one or more of my four children were students — and although I enjoyed it there, I decided to offer my volunteer services to Emmaus Public Library instead. Years later, when I was a food service worker at Emmaus Junior High School, I did volunteer time in the Emmaus Junior High library.

What are some of the biggest changes you’ve seen in the library over the years?

So many things have changed it’s hard to know where to begin!

Library hours and days have changed over the years, and the building itself has changed a lot too. The current adult fiction and nonfiction section was the first expansion, I believe, then the Margaret Knoll Gardner room was added. And now of course, we have the new children’s wing!

I think Maryellen is the fifth library director I’ve known. When I started, there were very few staff members, and even the library director — although considered “full time” — did not work even close to 40 hrs. per week.

When I began, Phyllis Stubbie was in charge of the volunteers. She was not on the staff, but was on the board of trustees, and she was in charge of training and scheduling the volunteers and anything else pertaining to them. At that time, the desk was taken care of exclusively by volunteers, not paid staff, and there were at least two volunteers scheduled at all times. You really needed at least two, because there were cards in the book pockets that needed to be filed when books were checked out. There were also student teens — known as ‘pages’ — that were hired to shelve books.

I have worked with perhaps three or four different circulation systems for checking books in and out and getting them back out on the shelves. I really like the circulation system we have today. It is so much more efficient and gets books and materials in circulation faster. It keeps much better track of overdue materials and fines, reservations, statistics, and many more things that are difficult to take care of manually. 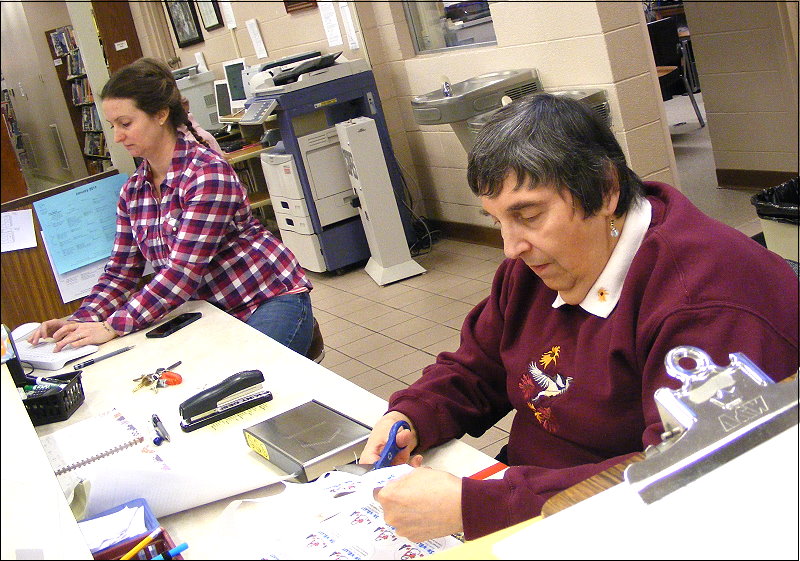 I also really appreciate Angie (services manager), who has filled a new position on the library staff and oversees the volunteers at the desk. I know that is far from the only thing she does, but I really appreciate the excellent work that she does!

I feel very privileged and blessed to have been given the opportunity to be a part of the volunteer ‘staff’ of the Emmaus Public Library for so many years. I continue to enjoy dealing with patrons and working with other volunteers and the staff. As with anything, there have been a few “rough” or difficult patches, but far outweighing any of them are the good and great experiences and times. I have met and worked with many different people — people I probably never would have had any contact with anywhere else. I could probably write a book about my experiences as a library volunteer!

Tell us a little about your background

I was born and raised in Emmaus. I graduated from Emmaus High and spent two years in Allentown Hospital School of Nursing.

I was an employee of East Penn School District in food service — that’s a ‘lunch lady’ — for almost 30 years. I served as president of the East Penn Food Crafters Association for a chunk of those years and served on various school district committees. I had four young children at the time, and this was a great job for me because I did not need a babysitter. I had off when they had off, and I was home to send them to school and home when they came home from school — at least for the most part. When they got older, my husband worked as a school custodian, and there were times when my husband and I went to school and the children stayed home! 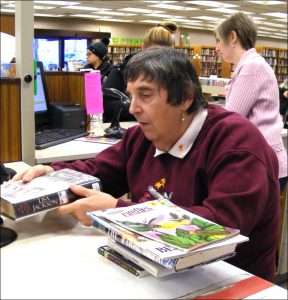 When the children got older — junior-high and high-school ages — and I had school holidays and summers free, I worked weekends during the summer at Don’s Food Market in Emmaus for a couple of years, and then I got a job as a meat wrapper at Weis Market in Emmaus. I worked part time in the summer, and Saturdays and school holidays during the school year.

In addition to being a library volunteer, I was also a den mother for eight years (and a year or so as committee chair of Pack 25) and taught my church’s first-year Confirmation class for 20 years. I acted as worship leader and Sunday School teacher in the adult class (I’ve been teaching Sunday School since I was 12 — not always adults, of course!). I’ve sung in the church choir since I was in second grade. I still sing on the senior choir.

I have served as a lay assistant to our pastor during worship services, and I still am a lay reader (scripture).  I have served as a deacon and an elder on our church council (serving as president for a year). I have acted as master of ceremonies for various programs and “roasts” and been the narrator for church cantatas. I was also a soup-kitchen volunteer for several years, but I could only serve during the summer, so that only amounted to once or twice a year.

I have also done a lot of babysitting for my grandchildren!

During all this time I was an Emmaus Library volunteer. When I first started, I worked Saturdays. I alternated Saturdays with Martha Vines, our former children’s librarian. In the summer, I substituted for other volunteers since I had summers free because I worked in the school cafeteria.

I hope to continue volunteering for a long time to come!

Do you have a favorite book or author? 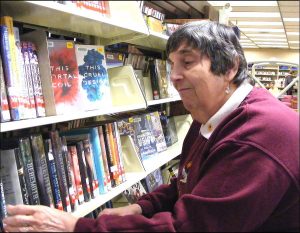 The first novel I ever read was Little Women. Still one of my favorite stories.

The book I’m reading now is by Sophie Hannah. It is The Mystery of Three Quarters: the New Hercule Poirot Mystery. I am enjoying it very much. Not by Agatha Christie, but close.

Through the years some of my favorite authors have been: Georgette Heyer, Joanna Fluke, Lillian Jackson Braun, Rita Mae Brown, Victoria Thompson, Louise Penny, Anne Perry, Agatha Christie, Donald Bain (Murder She Wrote), and many others.

My favorite book, however, may seem ‘corny’ but is really a library on its own. It is the Holy Bible. You do not have to be religious or a churchgoer to appreciate it. I believe that it probably contains almost — if not every — type of literature that exists, and I believe it is hard to find a story plot that is not in the Bible. A library of 66 books. The stories are for anyone and everyone!

What are your hobbies or interests outside of work and/or volunteering?

I enjoy singing on the choir. I do very simple knitting. I like to watch TV. And of course I love to read!

_______
Do you have a special interest or talent that you’d like to share with others? Would you like to lend your energy to the library in other ways? Stop in and ask for a Volunteer Interest form at the desk!

[Disclaimer: the views, information or opinions expressed in ‘Meet Our Volunteers’ interviews are solely those of the volunteers and do not necessarily represent those of the library or its employees.]