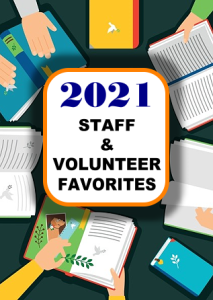 It’s time once again for a look back through our checkout history to choose the books, movies, TV series and more that entertained, moved and enlightened us this year.

EPL Services Manager (and über-reader) Angie polled library staff and volunteers — and the list is quite full, especially if you like fiction. Miss Sue included her picks for children and teens, including graphic novels.

Listed in alphabetical order (and published in 2021 unless otherwise noted). Titles link to the printed book format in the online catalog when possible (and you may place holds on items there from your online account); otherwise, titles link to OverDrive/Libby or Hoopla for digital versions when a printed book is not available through the library or the Lehigh Carbon Library Cooperative.

Listed in alphabetical order (and published in 2021 unless otherwise noted).

Listed in alphabetical order (and published in 2021 unless otherwise noted).

* Available in our DVD collection.

* Available in our DVD collection.

If you like podcasts, be sure to also check out these ‘bookish podcast’ recommendations from early 2020 shared by Lauri, adult services librarian.
______

There you have it! We’re excited to start finding the great reads and DVDs of 2022!