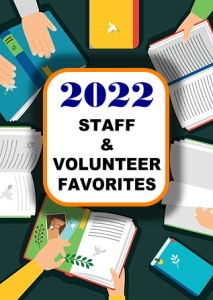 It’s our favorite way to close out the year — by revisiting our checkout history, our Goodreads profiles, and our memory banks to find the books, DVDs, TV shows, podcasts and more that entertained, enlightened, and moved us.

This year’s list numbers more than 75 items, and–just like our small-but-mighty staff and volunteer corps–it’s nothing if not eclectic. Aside from a penchant for fiction in general, and mysteries in particular, the choices cover a wide spectrum.

We hope you’ll find some of your favorites there as well, and invite you to explore new territory by checking out something totally new and different from your usual fare.

Note: Items are listed in alphabetical order (skipping ‘a,’ ‘an,’ or ‘the’ at the beginning of titles) and published in 2022 or 2021 unless otherwise noted. Links will take you to the printed book format (or DVD) in the online catalog when possible, and you may place holds on items there from your online account. In some cases, titles link to digital versions in Libby or Hoopla when a physical copy is not available through the library or LCLC (Lehigh Carbon Library Cooperative).

If no link is provided, we may be able to request the item from a non-LCLC library through interlibrary loan (with the exception of some TV series that are not yet available on DVD); please ask at the desk. Podcast links take you to the respective podcasts.

Whew — there you have it! Now we’re excited to start finding the great reads, DVDs, podcasts and more of 2023!